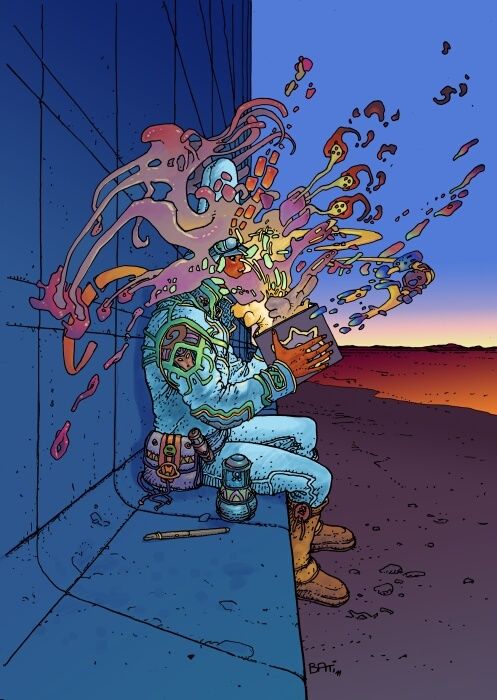 Elixirs are the province of the Vaarnish alchymist, a catch-all term for wondrous unguents, salves, tonics, nectars, and draughts, the recipes for which have been passed down through the eons. Infused with exotic molecules and enthusiastic nanomachinery, these single-use concoctions grant the drinker a variety of beneficial effects. They may be ingested by all PCs except those who are Synthetic or Mineral in nature.

Elixirs have a Potency of 1 to 5, on which more below.

Elixirs are brewed using a Component and Essences. Components are body parts harvested from dead (or possibly still living) creatures. This could be an eye, claw, tongue, heart, pseudo-liver, etc. Only one component can be harvested from each creature, and the harvester must make an INT save vs 10 + the creature’s HD. Failure means that the harvesting process was botched and the corpse spoiled. Components take up one item slot and do not stack.

Essences are generic ingredient types that can be extracted from the corpses of dead creatures. No INT save is required to render a creature down into a single dose of its essence. Up to ten of the same essence type can stack in one item slot. The type of essence extracted depends on the creature’s type, as follows:

Note: If a creature has two or more types listed, the PCs may choose which essence type is extracted. The other potential dose is lost during the process.

Brewing requires three elements: a heat source, a pan, and a receptacle for the finished Elixir. The brewing process takes several hours and cannot be rushed or truncated – interruptions will spoil the Elixir and render it useless.

The ingredients of an Elixir are one Component, which must be directly related to the Elixir’s intended effect, and a number of Essences equal to its Potency. The Essences used must be of different types. For example a Potency 3 Elixir could be brewed using Blood, Supercoolant, and Mycelium, but not three doses of Blood.

Potency should be determined by the Referee, with most Elixirs falling in the 1-3 range. A Potency 1 Elixir should have a minor effect comparable to a mundane item, such as allowing the drinker to vomit up a rope or glow in the dark. A Potency 3 Elixir is comparable to an Exotica in effect but not in duration, such as allowing a PC to teleport or rendering them invisible for an hour. A Potency 5 Elixir could have a permanent consequence for a PC, such as giving them a new body part or Mystic Gift, permanently increasing an ability score, or cloning them perfectly. Remember also that the effect of the Elixir must be tied to the nature of the creature its main component derives from.

While the intent of the system is to allow the PCs to be creative in what they brew up, and to incentivise them to seek out unusual monsters in order to steal their powers, here are a few examples of Elixirs that might be brewed.

Babel Beer (Potency 1)
Component: A tongue
Effect: Allows drinker to temporarily speak the languages known by the tongue’s owner. However, they will do so in the slurring, incoherent manner of one intoxicated.

Doppeldraught (Potency 2)
Component: Pickled flesh of a Doppelgeller
Effect: Drinker vomits up a jelly-clone of themselves. It resembles them but is translucent and mute. It will follow instructions, but dissolves after an hour.

Skulk Salve (Potency 3)
Component: The synth-skin of a Subtle Stalker
Effect: Apply to flesh to become invisible for the next hour.

Immortality Injector (Potency 5)
Component: The mercurial war-flesh of a Quicksilver Exterminator
Effect: A biological creature injected with this fizzing froth of nanomachinery cannot die. It can be damaged beyond recognition, but the life will not leave its frame. This effect lasts for one day.

This system is a direct adaptation of the alchemy rules in the current playtest PDF of Knave 2.0, by Ben Milton. You can get the early playtest PDFs on his Patreon. I really liked the concept and wanted to make them work in a Vaarnish context.