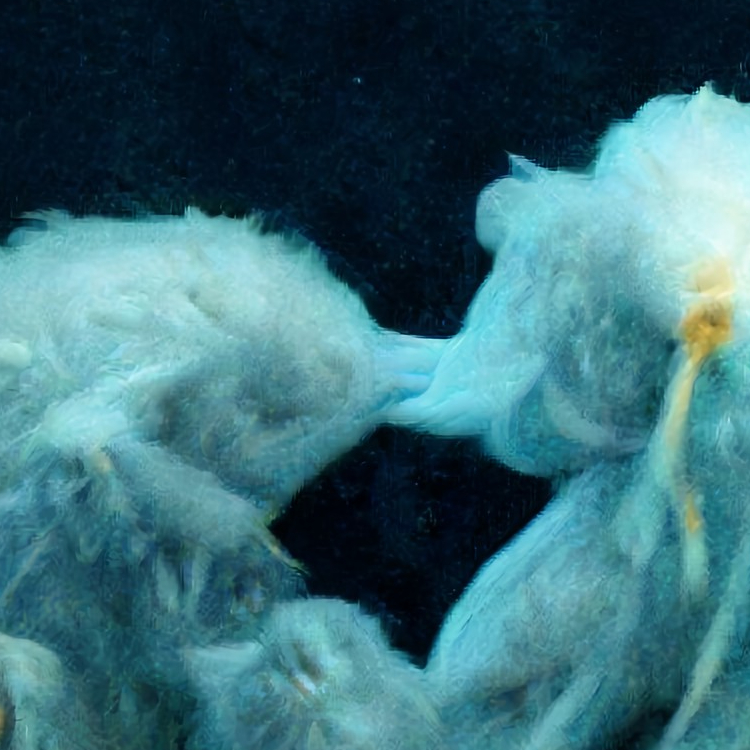 Last time we saw our brave boys, they had delved deeper into the innards of the Water Baron’s Aquifer machine, discovering a deep flooded shaft infested with grasping jelly-like tentacles and other strange creatures. They discovered a farm of giant aphids, a shriekman graveyard, and a makeshift prison with a single living captive: a curious man named Jo Nah Thon.

We rejoined the party in the shriekman prison, discussing what to do with Jo Nah Thon. They were continually unable to communicate with him, but he seemed willing to follow them as they left the prison to explore more of the Aquifer machine’s depths.

The next area they explored was some kind of grim shriekman dining hall, filled with the disgusting remnants of abandoned banquets. Ahead of them was another opening into the flooded central shaft, where the tentacles groped for food. The party were approached by a large, rust-encrusted spider crab-like creature, which moved ponderously but seemed aggressive. Thinking quickly, they set off a babble of voices on Jo Nah Thon’s talking wrist-watch and threw it underneath the rust-crab creature. The sound sensitive tentacles came surging into the dining hall and grabbed the unfortunate rust-crab, pulling it out into the central shaft to be devoured.

The party then crossed the central shaft themselves, narrowly avoiding some of the other tentacles. They found themselves in a new section of the facility, a room that seemed to be under the influence of powerful magnetic forces. A great deal of rusted and corroded metal objects were stuck to the wall and ceiling, and the hum of malfunctioning machinery could be heard. A boxy synth could be seen amongst the junk stuck to the ceiling, which the party attempted to communicate with. The synth was alive, but incoherent and unhelpful, and wasn’t able to tell them how to turn off the magnets. Karak, a cyborg, had no choice but to remain on the threshold of the magnetised room, while Flim-Flam and Findus, divested of all metal weapons and tools, cautiously explored this new wing of the facility.

Findus found a shaft that led further down, and descended on a rope, finding himself in a rust-red lair, faced with two of the rustacean creatures. They brandished threatening claws at the horse-man, who responded by slicing one of the rustacean’s legs off with his eye-lasers and then frantically gesturing at Flim-Flam to pull him back up on the rope. The second rust-crab followed him, and was then dispatched by the party in a lengthy, tense fight in the magnetised room, as they struggled to defeat the creature without making noise that would alert the tentacle monster. The rustacean’s armour was thick and resilient, but they eventually grilled it using laser weapons.

The party explored further to the north, finding a room filled with grey gas. They sent Nephew in first to act as a canary, and he promptly collapsed. They donned the rebreather masks they had taken from the shriekmen in the mold-covered room upstairs, dragged Nephew out of the room, and managed to turn off the gas leak. Nobody else suffered side-effects from the gas, and Nephew, when he awoke, was unable to describe the effect it had had on his fungal mind (I had quite a fun scene planned here, but everyone made their CON saves, so I didn’t get to do it. That’s life as a GM I guess. I’ll get them with the gas another time). They moved north again, finding a room filled with tangles of cable. Flim-Flam diligently searched through the drifts of wiring, discovering a hidden air-vent that led to a concealed room.

This secret room had been the home of a human being, the corpse of whom they discovered curled up on a sleeping mat. The body was heavily decayed, just bones and rags, but they realised the person had been wearing a jumpsuit identical to the suit worn by Jo Nah Thon. The corpse carried an ID card much like his, except the image upon it was of a young woman (Flim-Flam cynically predicted Jo Nah Thon “would cry” if they showed him the picture. Always painful when the players predict your extremely telegraphed dramatic moments in advance). Most interestingly, the female corpse had in her possession a strange device, somewhat like an industrial power tool, with a dark metal body and an orange hexagonal barrel. The characters could not identify this machine (although out of character they know exactly what it is), but took it with them for further study.

Moving down another shaft, Findus found a switch that seemed to reset the facility’s power generator. He pulled it, turning off the magnetic disruption in the higher floor of the dungeon. Karak and Jo Nah Thon witnessed everything that had previously been stuck to the ceiling and wall fall to the floor with an enormous crash. Unfortunately, this noise attracted the attention of all three blue tentacles, which came lunging down through the doorway to investigate the noise. What will Karak and Jo Nah Thon do to get away from them? What will Jo Nah Thon do when he finds out about the dead woman? Will Fiddy the aphid ever do anything to help the party, or will he just walk on the ceiling and chill? Find out in a few weeks when I come back from my break!

We had a trio of shorter sessions this month, with quite a lot of of off-topic talk and digressions. I don’t mind this at all, as all the players in my campaign are old close friends of mine and catching up with them is a big part of the reason I’ve run these online sessions for the past year and a half. I mention it only to explain why I’m summarising all three episodes in one post. I’m taking a few weeks off from running Vaarn games, so it’ll be August before we re-convene again.

If you’re craving more Vaults of Vaarn Actual Play, there’s a new blog called The Finders Trail which has started updating with session reports from their own Vaarn campaign. I think most TTRPG creators will agree that the most flattering tribute you can get is when someone else runs your material and gives it their own spin, so I wanted to draw my readers’ attention to the blog. Looking forward to seeing where it goes.

Last but not least, I just finished reading through Tomb Robbers of the Crystal Frontier, written and illustrated by Gus L, which is science-fantasy infused western setting where enormous crystal tombs fall from orbit to be raided by bands of desperados. You get a full dungeon and a little town to go with it, and it’s really nicely designed and would fit right into the Vaarn milieu if you wanted a starter dungeon. Check it out!