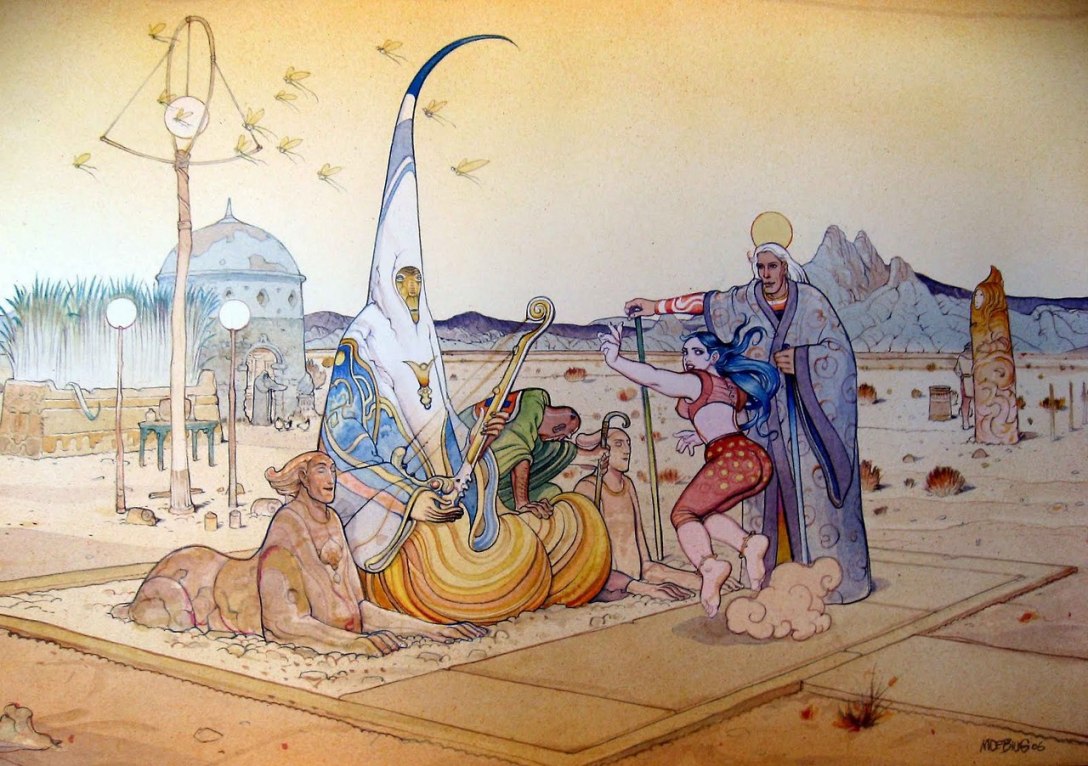 Last episode our heroes met an old friend, Karak, and went to a notorious Gnomosian nightclub, the Black Lotus, where they met some unsavoury characters and struck a deal with the menacing owner. Karak then blew the club’s generator by trying to merge his body with it.

We rejoined the player characters in the main lounge of the Black Lotus Club, just as the lights had gone out. There was general dismay, and lots of shoving. Crunk calmly put on his thermal visor, and escorted Penta (a dentist, New-Antelope, Findus’ date) and the snake-woman (a dancer who’d been entertaining them) out of the club, leaving Flim-Flam and Findus to flail around in the dark.

Meanwhile Karak the cyborg was downstairs in the basement, having just pulled some vital piece of machinery out of the power generator. Happy with his haul, he headed upstairs, easily evading the Black Lotus staff who had come down to see what the problem was. He managed to escape out into the street with the other PCs, and re-joined Crunk, Nephew, and the ladies.

The group decided to call it a night and headed back to their boardinghouse, the Lemon Tree. When they arrived they discovered the landlady was still awake in the ground-floor parlour, which posed an issue for Crunk, as she had specifically forbidden them from being rowdy or bringing back female ‘friends’ when they rented their rooms. Crunk attempted to sneak Penta and the snake-woman (whose name I decided was Ferona Hiss) into the boardinghouse. He blew his stealth roll spectacularly badly, and barely made it two steps into the hallway before being confronted by Clovide, the three-armed landlady. She remonstrated with Crunk, saying she had forbidden him to bring back prostitutes to his rooms. Ferona Hiss reacted poorly to being branded a prostitute and squared up to the landlady, flaring her cobra-like hood. This was shaping up to be a disaster.

Flim-Flam quickly intervened, using a dab of the frictionless spray they’d taken from the Magician’s hideout to send Ferona Hiss slipping out of the door to the boardinghouse, which they slammed shut behind her. Clovide seemed satisfied, but warned the PCs they would need to talk further in the morning. Chastened, they headed upstairs to bed. Penta (who had hidden behind Crunk during all the trouble) immediately passed out on Crunk’s bed. Finally proving himself a gentleman, Crunk slept on the floor, using Nephew’s spongy fungus flesh as a pillow. Karak finally examined the mechanism he had stolen from the Black Lotus Club’s generator, discovering it was a plasma core, a highly volatile battery.

The PCs slept. When they awoke, they discovered a long-lost companion waiting patiently outside their window. It was none other than Midnight, Flim-Flam’s cybernetic hunting hawk, who had been dispatched on a mission to the Pelerine Temple back in episode six! Flim-Flam was overjoyed to finally be reunited with his pet. The hawk brought a message from Mother Orma, who the PCs had rescued from the temple dungeon and installed as the new head of the Pelerine Order. Orma wrote to the party of her continued gratitude to them, and also told them that she had been perusing the private possessions of Mother Yarot, the deposed head of the Pelerine Order who Flim-Flam had shot dead. Orma had found a map to a location in the wilderness outside Gnomos, with writing indicating that Yarot had owned this property or had been ‘born’ there in some sense. Orma had also enclosed a strange stone disc, inscribed with ancient writing, that she believed was linked to this location in some way.

The party were somewhat intrigued, but decided the day would be better spent trying to take down the Water Baron. They elected to seek out Nashir, the captain of the Oblique of Understanding, a wind-barge that they had travelled in to Gnomos, as they knew that he was in debt to the Water Baron and would likely have information about this enigmatic character. They split up, with Flim-Flam and Karak heading to the book shop owned by Wormwater, a synth and fellow passenger on the Oblique, to see if he had any knowledge of Nashir’s whereabouts. Meanwhile, Findus and Crunk would seek out Gorsk the barge-boy, who worked under Nashir and would likely have a way of finding him.

Flim-Flam and Karak reached Wormwater’s store without incident. They found Benjy and a few other street-urchins waiting for them on the stoop – the PCs have put the children to work stealing water-debt tokens. They also spoke to Wormwater. The book-dealer hadn’t seen Nashir since disembarking in Gnomos more than a week prior. The synth was however able to identify the markings on the stone disc Mother Orma had sent the PCs: it seemed this was writing from the era of the Titans, the AIs who had ruled Vaarn thousands of years ago. Wormwater was no expert on Titan-age writing, but believed the disc was security clearance of some sort. As Flim-Flam and Karak left, Wormwater imparted one final piece of information: agents of Larke xan Lonrot, the Hegemony-backed Governor of Gnomos, had been asking questions about them. For what reason, the book-dealer did not know.

Crunk and Findus, meanwhile, headed to the ‘Boy Zone’, the hangout for the off-duty barge boys. They arrived as the party was winding down, but managed to catch Gorsk in the middle of a marathon pinball game. Crunk, very hungover, let Findus do the talking. The newbeast discovered that Nashir was likely to be staying with his paramour, a cacogen woman named Lindmoor, who managed the Water Baron’s luxurious bathhouse. They resolved to head there to track down Nashir, as soon as Crunk managed to kick his monster hangover…