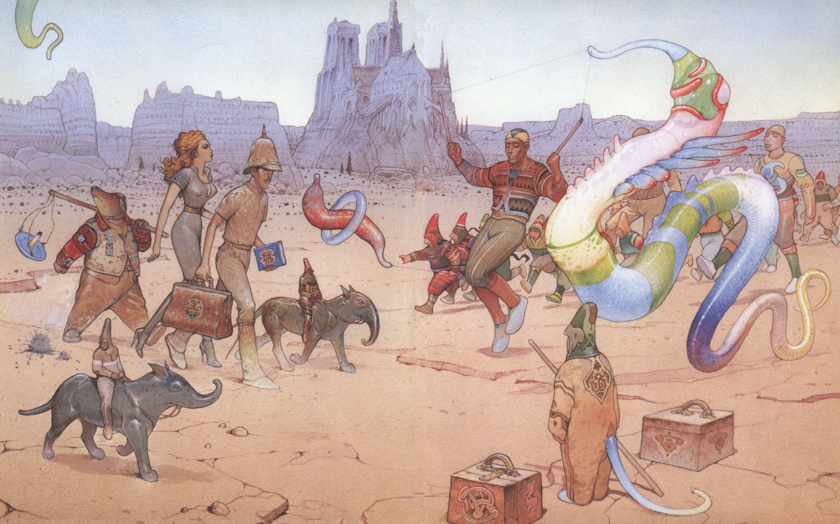 Last episode the crew met an eccentric fungus expert, rented some rooms at the Lemon Tree Boardinghouse, and went shopping. Crunk visited the dentist, and Findus was handed a mysterious invitation.

We rejoined the party in the bustling Great Souk of Gnomos, moments after Findus was handed a mysterious invitation to the Black Lotus Club. They did not have long to ponder this event, however, for a commotion caught their eye. Four Hegemony Soldiers were leading a prisoner in chains through the crowded market-stalls. Findus recognised the prisoner as an old debating partner from his days as a member of the Philosopher’s Society, and hastened to see what could be done to free his long-lost friend.

The prisoner’s name was Karak, and he was a gaunt, decaying cyborg, more machine than man, festooned with all manner of tubes and wires, shrouded in a tattered cloak. Talking to his captors, Findus discovered that Karak had broken into a guard post and attempted to steal all the machinery that he could get his hands on. It seemed the cyborg was intent on becoming fully mechanical, and would stop at nothing to obtain more machinery. Findus tried to stall the guards as long as possible, while Flim-Flam hatched a plan. Posing as a stall-holder, the cacogen approached the guards bearing a platter of free meat samples, which had been spiked with the ‘Foolish Friend’ fungus, a psychoactive drug that caused anyone consuming it to become highly friendly and suggestible. The Hegemony soldiers partook of the free samples, and quickly became Friends with the PCs as the mushrooms took effect.

Sweating, with eyes fully dilated, the lead soldier shook Findus’ hand and readily agreed to let him take charge of the prisoner, Karak. The soldiers forgot their duties and began shaking hands with the bemused crowds of market-goers around them, as the party made good their exit. At this point Crunk, returning from the dentist with Nephew in tow, cheerfully took hold of a Hegemony soldier, bundled him into an alley-way, and removed his uniform for use as a disguise. Now dressed in Hegemony crimson, Crunk rejoined his companions, and they ducked into a basement bar to drink some wine and catch up with Karak.

Ensconced in a dive-bar, Karak began drinking wine through a tube that emerged from his groin, and offered to analyse a strange hypergeometric crystal that Findus had been carrying since they left the Pelerine Temple. Karak determined the crystal was some kind of meditation focus for mystics, and would impart fresh mystical knowledge to someone who opened their third eye to its secrets. Findus immediately took the crystal to the bathroom of the bar, peered deep into its depths, and totally lost his shit. When he came to, he had learned the mystical power ‘Burning Shadow’, which allowed him to make his shadow corrosive. The crystal meanwhile had crumbled into dust. (This was a new game mechanic coming into use; Findus’ player had wanted to know how he would obtain Mystic Gifts other than his Laser Eyes. After some thought I ruled the hypergeometric crystal he’d obtained from a random loot roll could be the source of a new power.)

After this diversion, the party headed back to the Lemon Tree to get ready for their visit to the Black Lotus Club later in the evening. They arrived to find the dentist, Penta, a somewhat naive New-Antelope, waiting outside to be introduced to Findus. They made awkward conversation, encouraged by Crunk, who seems to relish his role as match-maker. She was shocked that they were heading out to the Black Lotus, but after some hesitation she decided you only lived once and agreed to accompany Findus there. The PCs left her outside the Boardinghouse in the care of Nephew while they went upstairs to find fancy clothes for their night out. Not having purchased anything, they ended up breaking into the room next to theirs and having Flim-Flam steal whatever he could find. Flim-Flam ended up wearing a formal lady’s dress, as it was the only garment with a neckline large enough to fit both heads into. Findus wore a bright yellow Austin Powers-style suit. Crunk wore a formal suit that was too small for him, and his muscles ripped the sleeves open, and Karak wore an ‘Elizabethan style’ outfit, but neglected the trousers.

Attired for the club, the party headed out into Gnomos. They stopped briefly on the way through the Red Quarter to gamble on a scorpion fight – they backed the wrong arachnid, although Crunk was able to win what they lost right back by arm-wrestling one of the gamblers, who turned out to be an off-duty gladiator. The man told Crunk he could win some prizes at the Crimson Court, Gnomos’ gladiator arena. Continuing through the darkened streets, the PCs came to the doors of the Black Lotus Club. They showed their invitation to the enormous doorman, still unsure of why they had been summoned or who they were set to meet, and were immediately hurried inside by a small New-Weasel in a white suit.

The interior of the Black Lotus was dark and opulent. A band played at one end of a large, smoky room, while groups of decadent revellers lounged in pillow pits, smoking opium and drinking wine. A serpent-woman danced on a podium at the room’s centre. Crunk and Nephew made a bee-line for the dancer, but failed to charm her into joining them for drinks. Meanwhile, Flim-Flam and Findus followed the white-jacketed maitre d’ to a higher floor of the Black Lotus, leaving Karak and Crunk to enjoy the club and keep an eye on Nephew and Penta. The cacogen and newbeast were led past a platoon of burly thugs, into the chambers of the Black Lotus Club’s owner, who had issued their invitation.

Flim-Flam and Findus found themselves in the presence of Preiver Prise, a black-furred New-Jackal who lounged on a mound of pillows, smoking opium. Prise greeted them and offered opium, which Findus accepted. He immediately failed his CON save and fell into a stupor on the lushly-carpeted floor, while Flim-Flam was left sober, to do the negotiating. Preiver proved to be an erratic host, alternately jovial and menacing, but he intimated that he’d heard the PCs had possession of a certain psychoactive substance – the Alzabo brain, which they had been carrying ever since they slew the beast in a desert ruin. Preiver Prise was evasive about what exactly he’d offer in return for the brain, merely claiming to be someone who could ‘do them favours’ if they pleased him. Flim-Flam eventually gave the drug-addled club owner half of the Alzabo brain, with the promise that the second half would follow once Prise had helped them. The menacing New-Jackal seemed happy enough with this arrangement, and gifted Flim-Flam with a golden Fez cap that had belonged to his father, as a token of good will.

While this was happening, Karak, uninterested in the pleasures of the flesh offered in the Black Lotus Club, decided to seek out machinery to merge with. He followed the wiring of the club into the lower levels of the building, looking for a generator. Karak found himself in a darkened wine-cellar, which had been converted into a prison of sorts. A true-kin woman with a missing arm was chained up inside one of the cells, and begged to be freed, claiming she could pay what she owed to Preiver. Karak attempted to pick the locks to her cell, failed, and then tried to pull apart the bars, which he also failed at. At this point the cyborg decide he was bored of the rescue mission, and headed off in search of more machinery to merge with, leaving the debtor to her fate.

The cyborg eventually came across his goal – a plasma-core generator that was powering the electronics of the Black Lotus Club. Karak immediately merged with the generator and began draining energy from it, feeling a fiery and refreshing surge throughout his cyborg body.

Upstairs, Flim-Flam and Findus emerged from their negotiations with Priever Prise, having been urged to enjoy the Club for the rest of the night. They saw Crunk, Nephew, and Penta, who were all very intoxicated and dancing immodestly with the serpent-woman. Just as Flim-Flam and Findus were about to join this scene of debauchery, all the lights in the Black Lotus Club went out.

GM THOUGHTS – We had a new player joining us this week, and hopefully will have them with us for the foreseeable future. Karak is a great addition to the party and provided some good laughs this episode. I was especially amused by their absolute indifference to rescuing the prisoner underneath the Black Lotus Club, and I’m curious as to what will result from their misadventure with the power generator.

Priever Prise is an NPC I’ve been wanting to introduce for a while, and was happy to finally get a chance to play him. The PCs have a new ally in Gnomos, although I feel that Priever’s friendship will come with some pretty big strings attached.