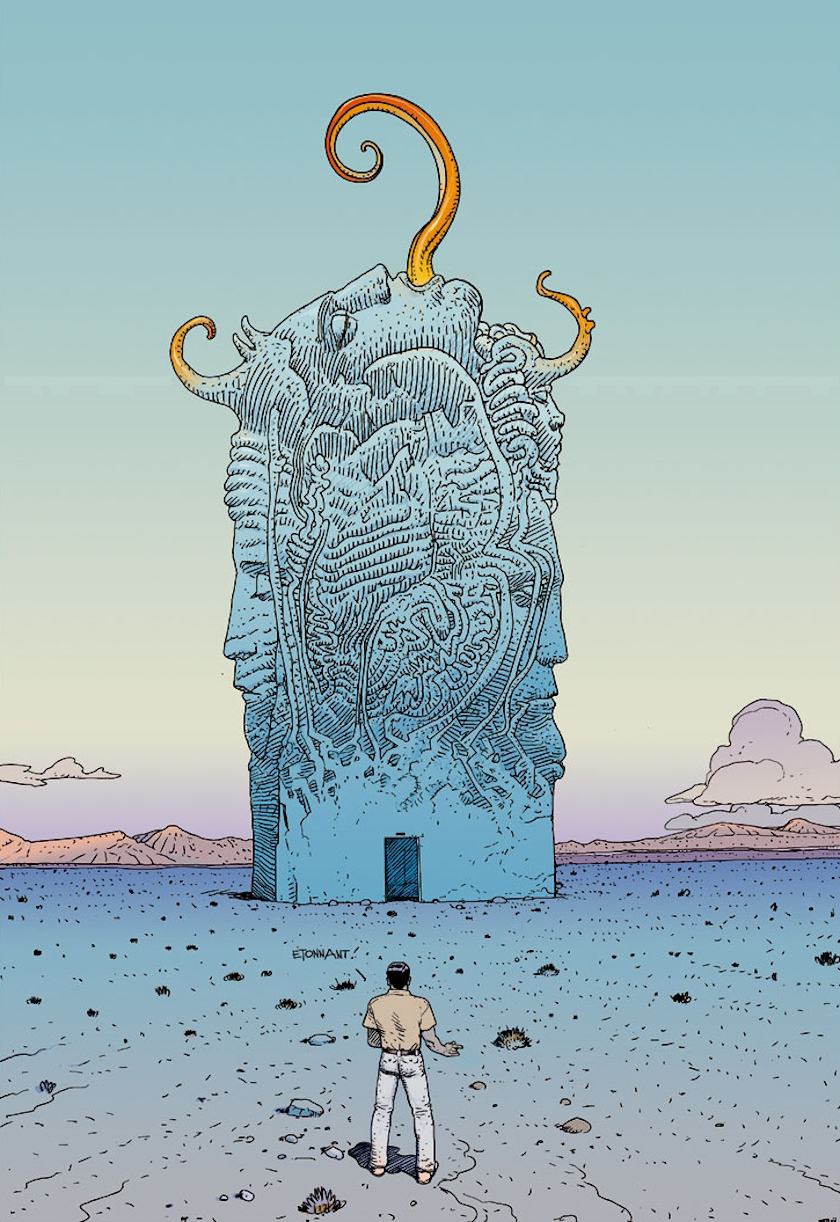 Back in January 2020 I GM’d the first ever playtest of the Vaults of Vaarn setting. This is an archival record of the Facebook post I made about that game.

The inaugural expedition into the wastes of Vaarn was a great success from my POV. I had never GM’d my own self-written material before, so I was extremely nervous, probably more so than I’d ever been before when playing any game. Luckily I had a great group and everything went really smoothly. I used a version of Ben Milton’s game Knave, which is a lightweight D&D-esque rules engine with a neat inventory system.

The party consisted of:

Old Deuteronomy, a newbeast Warrior, with a cat’s body and a man’s face. He fought using a chainsword.

Wellbeloved, a newbeast Mystic, a humanoid dog who wore a broken mask and fought with an envenomed whip.

Seventeen, a synthetic Mystic, who was child-sized, fought with a lump of bone, and wore a Chameleon Cloak that changed its colour.

Rectorum Chevron 65, a synthetic Mystic, who was a priest of a ‘fake religion’ that was set up to ‘scam’ robots. He believed this creed to be true, however.

Poucher Paeon, a cacogen Mystic, who had feathers instead of hair on his head and moved around on a slug-like lower half.

After rolling for equipment, the vault-raiders found themselves standing in the blue wastelands of Vaarn. They were in front of a tomb that dated back centuries to the old Autarchy. On the western face of the tomb was carved the face of a young boy; on the eastern face was carved the face of a proud warrior. The summit of the tomb was carved like the face of an old bearded man, staring open mouthed up to the sky. The party could see huge plumes of orange fungus growing out of the old man statue’s mouth, a kind of fungal chimney. The party were unsure if this growth was an intended part of the structure or not.

Wellbeloved walked around the tomb and saw that both the child and warrior face had open mouths that acted as doors. The newbeast sniffed at both, and detected the scent of mammalian life and dung inside the child-face’s room (this was actually a harmless bat colony, but the PCs were understandably wary). The party decided to enter through the warrior’s mouth instead, and went into a dark room engraved with scenes of battle. There were four preservation tubes in this room, but whatever had once been inside them was consumed by the same orange fungus they had seen at the top of the tomb. The party examined the orange fungus, but wisely didn’t open the tubes.

There was a choice to head north or south. Old Deuteronomy went ahead to the north and checked around a corner with their hand-mirror. The cat-man saw a strange room, filled with ulfire light (the ninth colour) and enormous lattices of memory crystal. There was also a figure sitting cross-legged amongst the memory banks. Chevron 65 approached this figure and engaged them in conversation about religion. The yellow-robed figure introduced themselves as Silas, an Archivist from the Church of Eyeless Wisdom. The creature, who was masked and likely non-human, explained that it was searching through the nobleman’s memories that were contained inside the crystal structures, although would not say what it hoped to find. The blind Archivist said that, as the sun was dying, there was no need for sight and that wisdom resided in darkness, and remarked that they had not seen their apprentice Bathiel in some time. Having thoroughly taken against Silas, branding him a ‘creep’, the party continued up a flight of stairs, deeper into the tomb.

Poucher triggered a swinging blade-trap on the stairs but used his super speed, a mystical power, to avoid it. The party found themselves in a pentagonal room, in which five canopic jars were supposed to be stored on plinths. Two were unmolested, containing the nobleman’s lungs and liver, but two were missing, and the fifth had been invaded by the orange fungus, which had warped the preserved tissue inside the jar into some kind of ghastly fungal head, which was singing quietly. The party attempted to converse with the head but it would only scream.

Chevron 65 at this point decided to make use of his fungal squire, a tiny dried-up fungus man named Valerio. Valerio was revived using a drop of blood, and sent to try fungus diplomacy with the head. Valerio was able to calm the head down, but the noise had already attracted the creatures that had been spawned by the orange fungus infection breaching the two missing canopic jars. The jar creatures came charging up the stairs to face the party: an octopus-like being that had grown from the nobleman’s preserved guts, and a bizarre fungus-brain monster, which had grown a single human leg on which it hopped. Terrified and squealing, Valerio hid back inside Chevron’s clothing.

Poucher Paeon held the jar-monsters off with a mystical force wall, while Deuteronomy laid down an animal trap, hoping to constrain the movement of the monsters. The force wall fell and battle commenced. The greatest injury was incurred when Deuteronomy was psychically possessed by the brain-creature. The newbeast viciously attacked their companion Wellbeloved with a chainsword, dealing significant damage. Poucher crushed the gutopus with another force wall, and Seventeen killed the brain creature with her bone club, ending its psychic domination of Deuteronomy. The party were then able to take the canopic jars the creatures had spawned from and return them to their empty plinths. The ceiling above the canopic jar room retracted, revealing the heart of the tomb where the nobleman’s body was preserved.

The heart of the tomb was a strange room, even by the standards of Vaarn. The party found themselves inside a large spherical cavity, the curved walls engraved with scenes from the nobleman’s life. At the centre of this cavity was an anti-entropic sphere, a piece of arcane technology that had been intended to preserve the body of the nobleman forever. Unfortunately, the sphere had been infiltrated by the same orange fungus that had mutated and corrupted his canopic jars. What was supposed to be a perfect frozen instant of eternal rest was instead a pageant of decay. What’s more, the anti-entropy sphere was malfunctioning as a result of the infection, and gravity inside this central tomb cavity was non-existent.

The party were alarmed to discover that they were now floating, and had to make DEX saves to move around. The newbeast Wellbeloved used his whip to latch onto the central anti-entropic sphere and pulled himself towards it, which unfortunately alerted the fungal horror within the sphere to the party’s presence (I was amused by this development, especially since Wellbeloved’s player had been so cautious about scouting danger earlier during the session). Battle commenced in zero gravity, with the party facing off against a billowing cloud of living orange fungus that seemed to be clinging around the body of the dead nobleman. Wellbeloved and Seventeen used their mystical powers to blast the monster with ultrasonic screams and Palpatine-style lightning, but the fungal creature was visibly re-growing its vile body, and was resilient against the party’s attacks. Poucher Paeon eventually used their force wall to isolate the skeleton inside the fungal mass, which weakened the horror considerably. This allowed Wellbeloved to deal a final blow with the same whip that caused all the trouble in the first place. The nobleman’s body now floating harmlessly in zero-G, the vault raiders searched through the mould and flesh. They discovered the nobleman’s treasures: a strobing synth-killer’s dagger, which Wellbeloved christened ‘Warcrimes’, and a hypergeometric box that contained a tiny pocket dimension (useful perhaps for smuggling).

Finally the party turned their attention to the fungal chimney above the chamber. The synths climbed it, as it was felt to be too dangerous for biological creatures. At the summit of the tomb, perched upon the carving of the old man’s face, Seventeen and Chevron 65 discovered a desiccated corpse in a yellow robe, which they presumed to be the remains of Bathiel, the apprentice archivist Silas had mentioned. They were surprised to see that the apprentice’s corpse was long-dead and mummified, indicating Silas’s work in the memory crypt might have been going on much longer than they had believed. The orange fungus seemed to be seeping from the corpse of Bathiel’s eyes, and they believed this body to be the initial source of the infection. Searching the apprentice’s body, Chevron 65 discovered two plastic baggies of fungal matter. One specimen was orange, the other pink. Having already ascertained some of the effects of the orange fungus, although little wiser about why Bathiel might have succumbed to the infection, the synths left that bag alone, taking the rosy pink specimen for further study. The two robots climbed down the side of the tomb and re-joined their biological companions on the blue sands of Vaarn.

I was really happy with how this worked out. It’s easy to worry you don’t have ‘enough’ content, but 5 to 7-room dungeons are plenty of fuel for a brisk session. We played through the Tomb of Nassak An-Rah (the party never discovered the dead nobleman’s name, as they couldn’t read the language of the old Autarchy and didn’t ask Silas about the tomb) in about ninety minutes, with forty-five minutes at the start for character generation. That’s a great timescale and is something I’d be looking to reproduce when I’m creating small environments for Vaarn in the future.

I don’t think I made any huge mistakes or wished I’d called something differently. I chose a voice for Silas that was hard to maintain and very quiet, although I think it suited that NPC. I did wish I had asked for rolls to identify what the strange artefacts they found on the nobleman’s body did, especially the Hypergeometric box. I think it would have been even more fun to work out the secret in a later session, rather than being told by the GM straight away.

Lastly, I’m still working out how the Mystic class’s ‘Gifts’ should play in Vaarn. I really want player creativity with the spells and a looser feel than D&D 5E, but I also don’t want them to dominate combat in every instance, or there’s no point in using the Warrior class ever. At the moment players pay an HP cost to use their Gifts, which I’m considering increasing across the board for the next playthrough. I based the costs initially on Whitehack, but that game assumes level 1 PCs might only have 3 HP. My players had more than three times that amount, so I think the Gifts need to cost at least 1d6 HP each time they’re cast.

Thanks again if you were one of my players for this first play-test! I really appreciated your presence and your interest in the environment I wrote about. There will be more of Vaarn soon; I think I’ve found my signature setting for the foreseeable future.